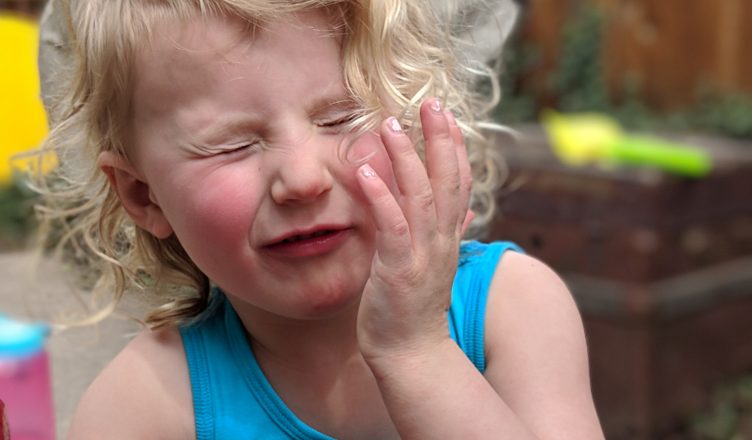 It’s pretty easy to put a lot of pressure on yourself as a parent. Is my kid eating the right food? Is she watching too much TV? Is she social enough? Is she hitting her developmental milestones? Should we force her to eat more green things? To a point, that’s healthy. It’s natural to want the best for our kids. But at the same time, it’s good to keep in mind that you’re going to fuck up at parenting sometimes.

Once upon a time, I was walking through the house with one of my daughters in my arms and I clipped a door frame with her head. She didn’t like it. I’m not going to tell you which daughter it was.

I’m not saying you should stop trying to get your kids to eat their vegetables or limit screen time. But at the same time, don’t beat yourself up too much if some evenings you Just. Can’t. Handle. It. And it’s hot dogs and Oreos for dinner with no bath. If you Just Can’t Handle It every night, then something bigger is going on that needs to be addressed. But if it’s once and a while, don’t sweat it.

The same goes for modeling good behavior for your kids. I’ve written before about the idea that kids have big ears and pay a lot of attention to the behaviors you model for them. But not every interaction you have is going to be a prime teaching moment. If you snap at the smug Delta gate agent when she’s informing you that you just should have run faster when trying to make your connection across the largest goddamned airport in the country while lugging kids and bags and doubling back for a dropped stuffed animal, well sure, you could have reacted better. But you’re going to fuck up sometimes and that’s okay. You’re going to fuck up at parenting sometimes. Just try to do a little better next time.