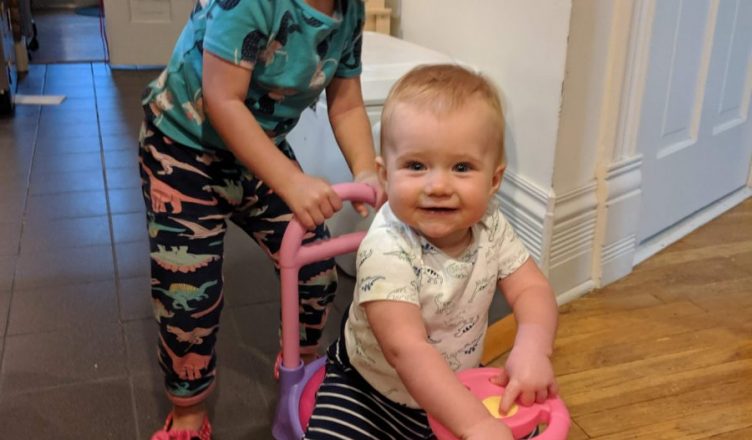 When my wife and I were considering having a second kid, some parents warned that the amount of time and effort raising kids takes doesn’t increase in a linear fashion from one kid to two — having two kids isn’t twice as much work as one. “Great!” I thought. Then they told me it was more than twice as much work. That sounded… not so great. So, are twice the kids more than twice the work?

The biggest difference is how dividing-and-conquering works. With one kid, one parent can handle kid duties while the other parent does completely unrelated things, like making dinner or reading a book or running errands.

With two kids, either both parents are handling kid-duties, or one parent is outnumbered 2-to-1. Which isn’t the end of the world if things are going well, but if Kid 1 melts down or needs to be put to bed and Kid 2 wants attention at the same time, things can get hectic.

And unless you had multiples (if you did, good luck, I don’t have much good advice for you), you’re also dealing with two different stages of kid problems at the same time. The constellation of toddler issues and problems are different from infant issues and problems, and they require different solutions. For example, while infants can make you upset, they can’t hurt your feelings like toddlers can.

Our daughters are almost exactly three years apart. One thing that pleasantly surprised me about the arrival of Kid 2 was that it had the impact of strengthening my relationship with Kid 1. On weekends where we might have otherwise done things as a family with Mom, when Mom was either very pregnant or nursing it became easier for Kid 1 and I to do something, like camping, as a pair. One-on-one time strengthened our relationship quite a bit.

Ultimately, parents who regret having a second kid are pretty few and far between. Maybe it’s an evolutionary drive, maybe it’s confirmation bias, maybe it’s because babies are cute. But generally, I think if you’re debating between one kid and two, you’re in the middle of a “positive dilemma,” and things will go well either way.